The Positive Effects Covid Has Had on the Music Industry

The Coronavirus has resulted in discounts on music production gear, free access to music education, and brought music stars and icons closer to their fans.

At the height of the Covid-19 outbreak, it seems more and more of those in quarantine are beginning to itch from the lack of things to do. While much of the world population is now either hopeless and unemployed, stuck in the same household with people they don’t like, or getting fat from lack of movement and the free delivery takeaways — others have chosen to help the needy, pursue new fitness habits, or just generally try and adapt to a more sustainable way of life as a result of the crisis.

Despite the ongoing uncertainty and pent up frustration from being cooped up against our free will, the widespread lockdown has had a different effect for many people, and acted more as a time of inspiration to get creative and reconnected — particularly for those who like music.

According to the Rolling Stone, U.S. retailers have seen a considerable surge in sales for music making software, outboard gear, musical instruments, and other studio equipment like midi keyboards, drum machines and microphones in the past 3 weeks.

Since the economic crisis was sparked in America in February, there have been over 13 million downloads of Garageband in that time. Ableton have also seen huge sales in their discounted 6-part online Live 10 Training Course, while Apple have extended their 90-day trial of Logic-X due to the trends between online users and music production-related searches. In addition, Waves are running a 40% discount on its entire plugin range when placing an order for $50 or more.

Big music names such as Travis Scott and John Williams have been making some heart-warming tributes to the doctors and nurses who’ve been helping to combat the virus so far, while other stars like Fiona Apple have begun releasing new albums and projects early to help raise money for health services, and keep certain clubs and venues alive.

Artists like Paul Van Dyk and trance icon Ferry Corsten have been delivering audio visual live streams so fans can still enjoy their DJ sets from home. Considering thousands of musicians, bands, and singers have had all foreseeable tours cancelled, it’s great to see so many of them still engaging with fans and doing what they can to help.

For those looking to explore other creative, musical hobbies to help you get through quarantine — such as learning to play an instrument or understanding music theory better — you can now also make use of several free online plugins, courses and apps, as well as live tutorials from the world’s top academies like London Music Masters.

You can also find free masterclasses with iconic composers like the legendary Hans Zimmer, and get discounted violin lessons from famous Star Wars violinist, Harry Kerr.

It may be a long time before we’re out of the woods with this pandemic, particularly in the states. This is why it’s important to keep spreading positive messages during a time when the economy is at its most vulnerable. Urging us to make music with free education and online tools is a good way to do that, and one of the best ways to remind us all that life will continue beyond this crisis. 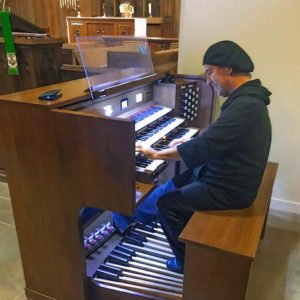 Carlos is a freelance organ donor (and writer) with a passion for analogue synths and vintage effects pedals. He is also extremely savvy at keeping up with the latest music trends, which makes our lives much easier here at Music Giants.
PrevPreviousStudio Furniture Every Music Producer Needs
NextAKAI – Profesional – MPK Mini-MKII – In Depth Review 2021Next